Every Buckeye Trail Middle School (my middle school) kid hears about the haunted Egypt Valley in Belmont County, Ohio.  Egypt Valley is a wildlife reserve that doesn’t fit into the landscape.  You’d expect lots of tall trees, maybe a stream and a lot of deer.  Egypt Valley is different, there are giant rocks, jagged cliffs and patches of dry brush everywhere.  It just doesn’t make sense.  It is said that ghosts and other creatures own the night terrorizing anyone brave (or stupid)  enough to make the trip.

The true story begins in the mid-1800s with a young teenage girl, Louisa Fox, and her boyfriend, Thomas Carr.  He was much older than the 13-year-old girl and wanted to be married.  She was young, and he could be scary at times.  The townspeople described him as troubled, violent and angry.  He proposed and she agreed but later broke off the engagement.  He was furious.  He waited for her one night while she walked home from work.  He stopped her, kissed her goodbye and stabbed her 14 times after slitting her throat.  He attempted suicide by cutting his own throat and shooting himself, but survived and was sentenced to death a week later.  He was the first person in the county convicted of murder and was hung about a year later.

Terror by R-y-a on Deviant Art

Below is an anonymous personal encounter of paranormal activity in Egypt Valley found on Forgotten Ohio.

On September 13, 2003 me and a group of friends were getting ready to go fishing when we heard the story of Circle Cemetery from a friend who had visited the place before. That’s when we decided to visit this so-called haunted cemetery. We drove up to the cemetery and pulled over and began to walk up to “the circle.” Then we stepped up to a marble headstone and the air got real cold. We weren’t really scared, that was until we heard the dogs bark. But they suddenly stopped and we calmed down a little bit. Then, out of nowhere, our sides started to burn and we lifted our shirts. Three claw marks were stretched across my side like a dog’s paw. Two of my other friends suddenly had burning sensations in the face and arms when they looked down they had pricks and my one friend had cut marks above his eye with blood coming out of it. That’s when we decided to leave the cemetery.

I live about three hours North of Egypt Valley so I would never visit in hopes of finding phenomenon.  Even when I was younger and  lived with my parents in the Egypt Valley area, I was never the type who volunteered to dabble in paranormal activity.  I’m not scared of much, but spirits, ghosts and demons are not my cup of tea.  My theory is that unless you know an exorcist, you’re pretty much screwed.  Evil spirits are not like monsters, you can’t shoot them or protect yourself using physical force.  You can’t run or hide.  You’re left terrified and helpless. 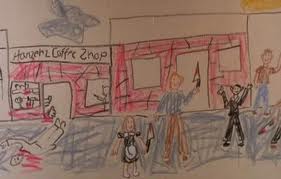 A child's drawing of what looks like a murder scene

Inspiration for art comes in many forms.  Those interested in macabre may use fear as fuel for an artistic spark for expression.  Our experiences with the paranormal are insights into perspective, personal beliefs and individual reaction.  The word paranormal describes an unusual situation that lacks a scientific definition.  It would be difficult to explain such an experience to someone who has never encountered paranormal phenomena.  It may help to try to recreate the experience by giving the story a visual.  Art is way of expression, interpretation and relief.  Think about the horror movies you’ve seen in which children draw monsters and demons that have visited them.  Only after the parents have accepted something unexplainable is happening do they look to the art work for proof.

I'm a glitter-gluing, weight-lifting, cupcake-loving tomboy who enjoys romantic comedies, zombie video games, and pretty shoes. I'm a public relations grad student with high hopes and shallow pockets. May the force be with me. END_OF_DOCUMENT_TOKEN_TO_BE_REPLACED
This entry was posted on Thursday, March 31st, 2011 at 12:54 pm and tagged with Egypt Valley, fear, Haunted Ohio, Haunted Places, macabre, Paranormal Activity, Paranormal Sightings and posted in Haunted Places, Macabre. You can follow any responses to this entry through the RSS 2.0 feed.
« Channeling Your Inner IMC
The Art of Nightmares »